A Day Out At: Newquay Zoo

Find out what animals we encountered at Newquay Zoo, and why you should visit this fantastic attraction all year round.

On Thursday 29th August the What’s On team took a trip to Newquay Zoo. With so much to see and do this is definitely a great place to visit all year round. Having recently celebrated its 50th anniversary, Newquay Zoo is now home to 1,41 animals and 185 species. From the African Savannah to the Gems of the Jungle to Marmoset Island we explored the wonderful and the wild. Read on to find out what we discovered.

We began our animal adventures in Lemur Land with the Black and White Ruffed Lemurs. This critically endangered species derives from the rainforest canopies of Madagascar and is one of the largest lemur species. We managed to spot two through our telescope relaxing in their island home. Further up the lake we also spotted a Ring-Tailed Lemur and a happy host of mallards, sea gulls and other lakeside birds. As you make your way around the zoo you will have the chance to learn some animal sign language. Can you make the sign for duck below? 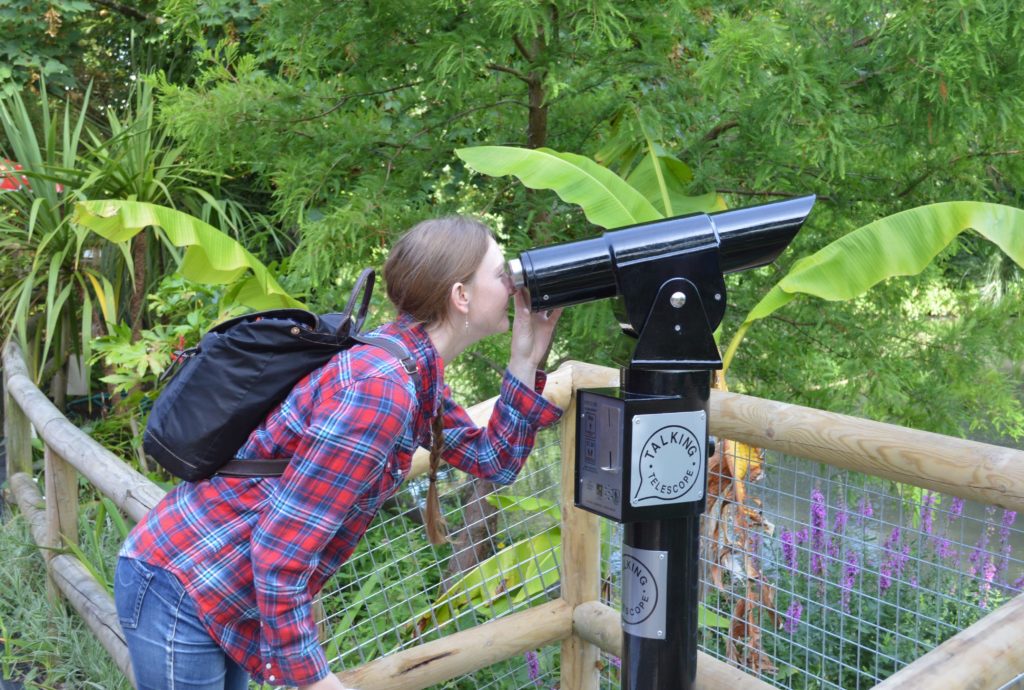 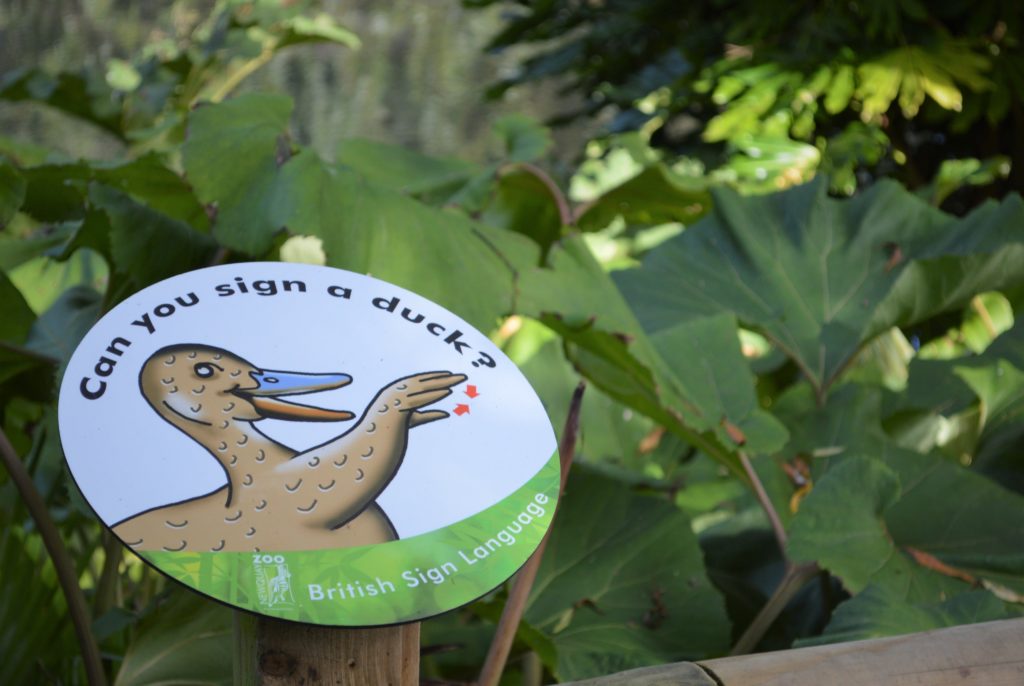 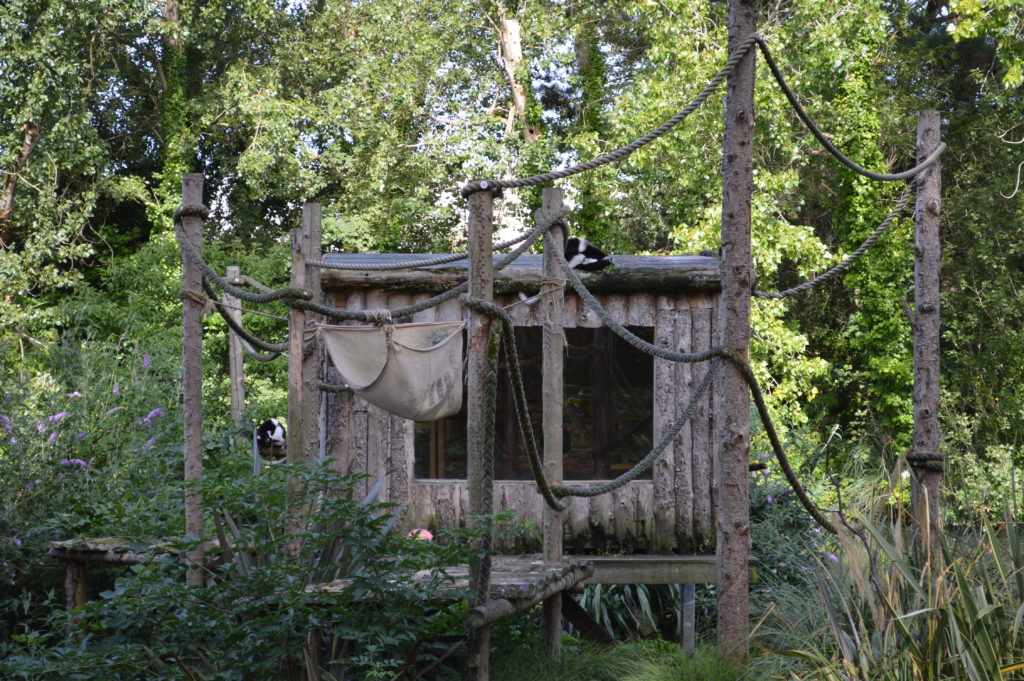 As well as promoting the use of sign language, 80% of the Zoo is accessible for wheelchair users. Wheelchairs are available for hire from Newquay Tourist Information Centre and you can find an accessible toilet by the entrance and baby changing facilities throughout the site. Newquay Zoo also offer free accessibility maps on request from the information desk.

Philippine Spotted Deer were grazing happily opposite Marmoset Island. Mainly nocturnal, these deer are probably the most endangered de 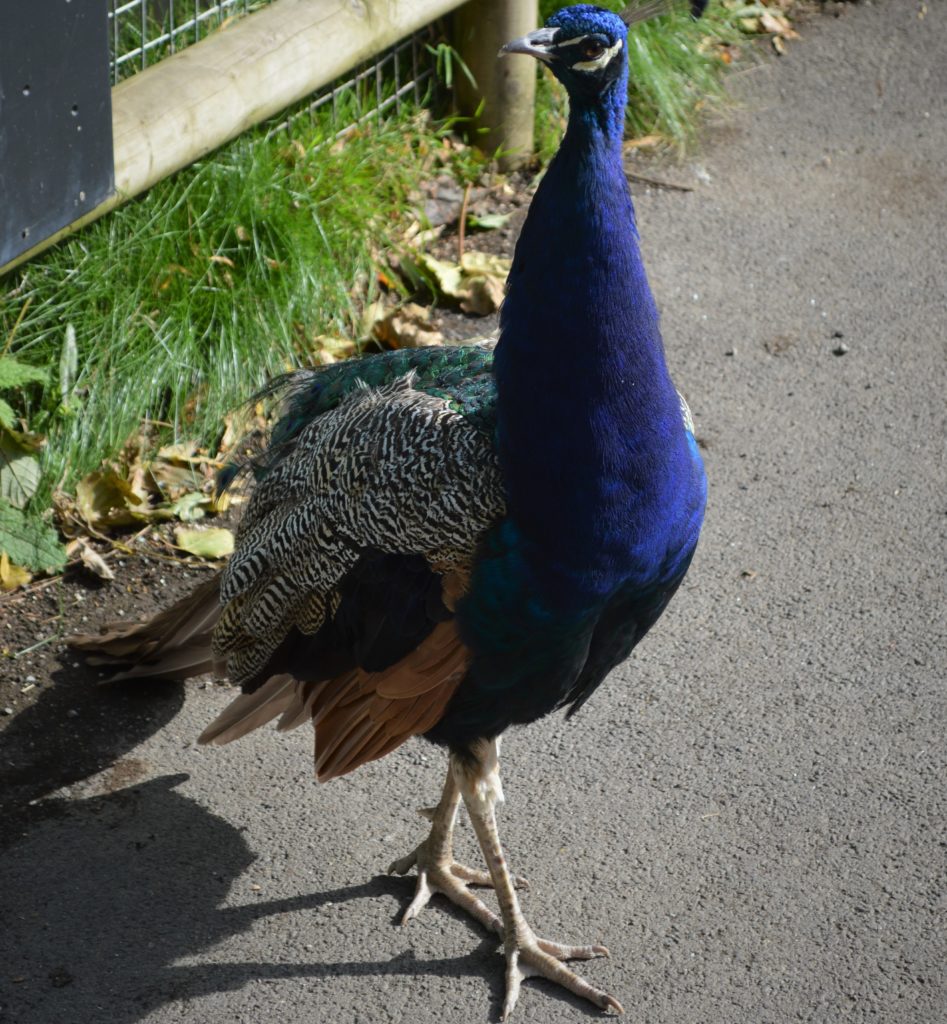 er in the world due to habitat destruction and illegal hunting. Sadly the Fishing Cat didn’t want to come out and play during our visit, but we did meet a very photogenic peacock on our way to the Savannah.

You can watch zebras and wildebeests from the viewing platform overlooking the open plain. Zebras tend to stick close by one another in groups as their black and white markings become a clever camouflage to confuse predators. During migration season, zebra families may often team up with other grazing groups including wildebeests and antelope as they make their way thousands of miles to new greener pastures. Leading up from the African Savannah you will come across the Owl Aviary where we found 3 Ural Owls snuggled up together on their perch. Ural Owls have a similar call to that of a Tawny Owl, but you only tend to hear them during breeding season when they are searching for a mate.

Newquay Zoo is great place for families. Dotted amongst the animal enclosures are children’s play and picnic areas, the Tarzan Trail where you can test your jungle strength and even a Dragon Maze. Formed out of a series of connecting hedges, the Dragon Maze was designed in the early 1980s by renowned maze designer Adrian Fisher. Adrian and his company have created over 700 mazes across 36 countries in all sorts of venues from castles to zoos to amusement parks to children’s museums. The round areas of the Dragon Maze originally contained aviaries for birds. 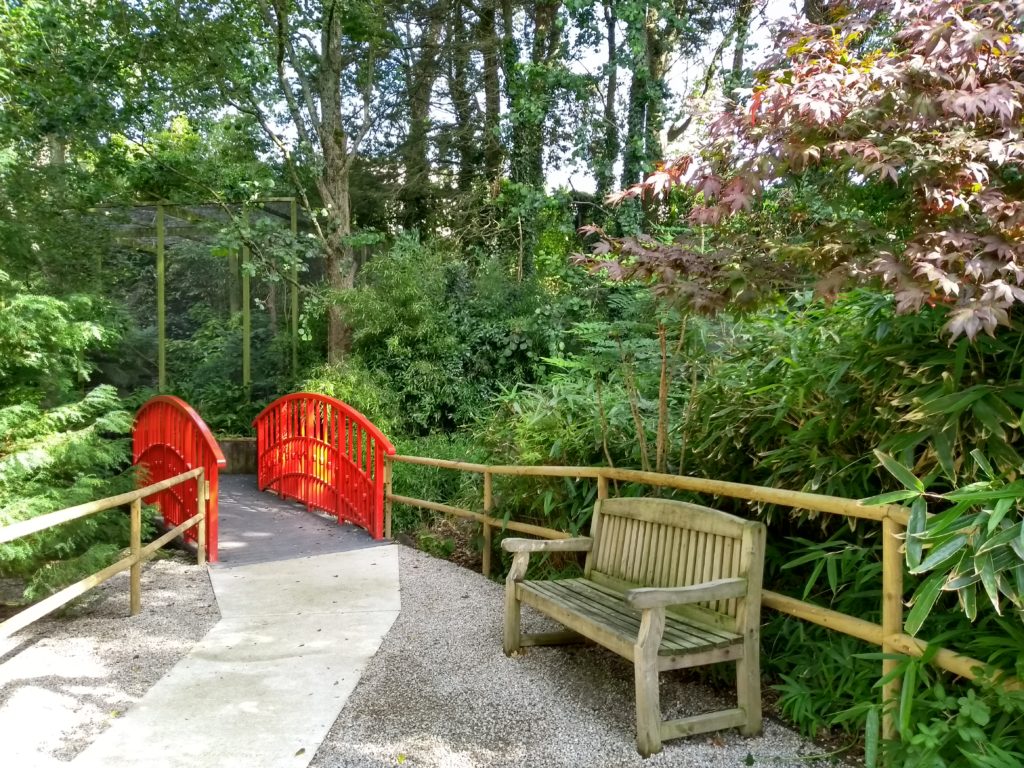 els we came across the beautiful Oriental Garden. Oriental Gardens often feature beautiful or symbolic plants, animals and buildings and have been described as “creating a poem in stone or planting a Chinese landscape painting”. Here we found the Asian Short Clawed Otters who were all curled up in a bundle of straw enjoying an afternoon snooze, completely unfazed by all the eager faces pressing against the glass. These otters are usually found in freshwater wetlands and mangrove swamps and unlike most otters are very social, forming bonds and mating for life. The male and female Asian Short Clawed Otters both help to raise their young. 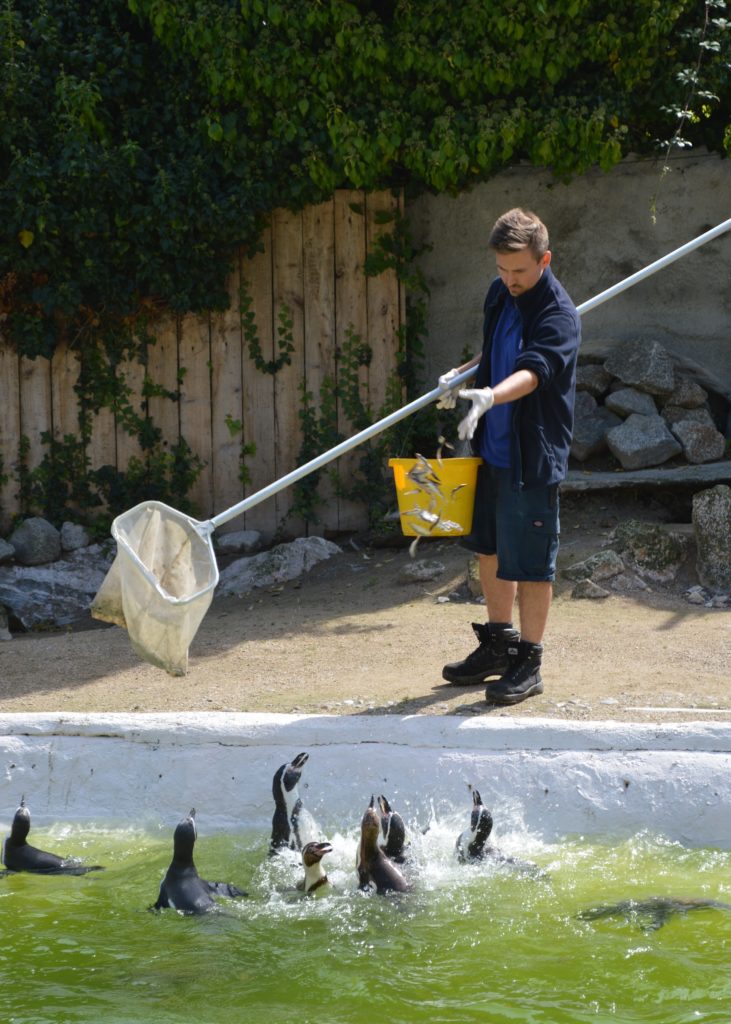 We stopped for a quick bite outside the Lazy Lion Grill before heading to the pool to see the penguins have their lunch . Newquay Zoo run daily feeding and talks for visitors to learn more about the animals and see them in action. Check their website for feeding times and see which animals you can encounter on your visit. While they may not be very graceful on land, the penguins were zipping about in a flash underwater diving for the handfuls of fish thrown in by the keeper. According to Newquay Zoo they can reach up to 30mph in the water using their feet and tail as a rudder to help them steer and turn. Humboldt Penguins typically live on rocky coastlines, building their nests between cracks and crevices in the rock using a substance called guano (penguin poo!). Guano is a sort after substance and the over collecting by humans has contributed to the decline of the species population.

One of the lovely things about Newquay Zoo was that many of the enclosures had few barred barriers between you and the animals. Particularly when you first walk in the entrance you come across the grand Tortoises who are only separated by a knee high pane of glass. And although there is a distance of water between you and Lemur Island everything is open. It feels much more like you’re in the wild with the animals, sharing their space. The meercat enclosure was low enough that children could see over the top and you could get right up close to watch them. Meercats tend to live in groups of up to 30 known as a ‘mob’ or a ‘gang’. Members of each meercat mob will share ‘sentry duty’ by standing alert on their hind legs like soldiers, to alert others when danger is near. Meercats have different calls for different threats. You can see multiple meercats sitting alert in the image below and one standing on official ‘sentry duty’. 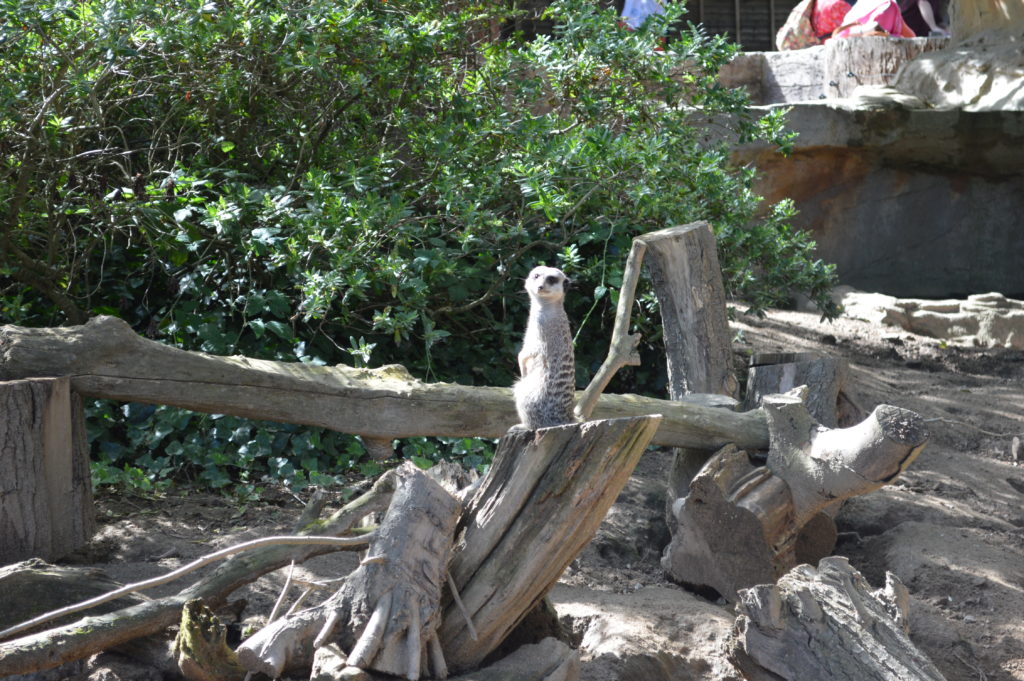 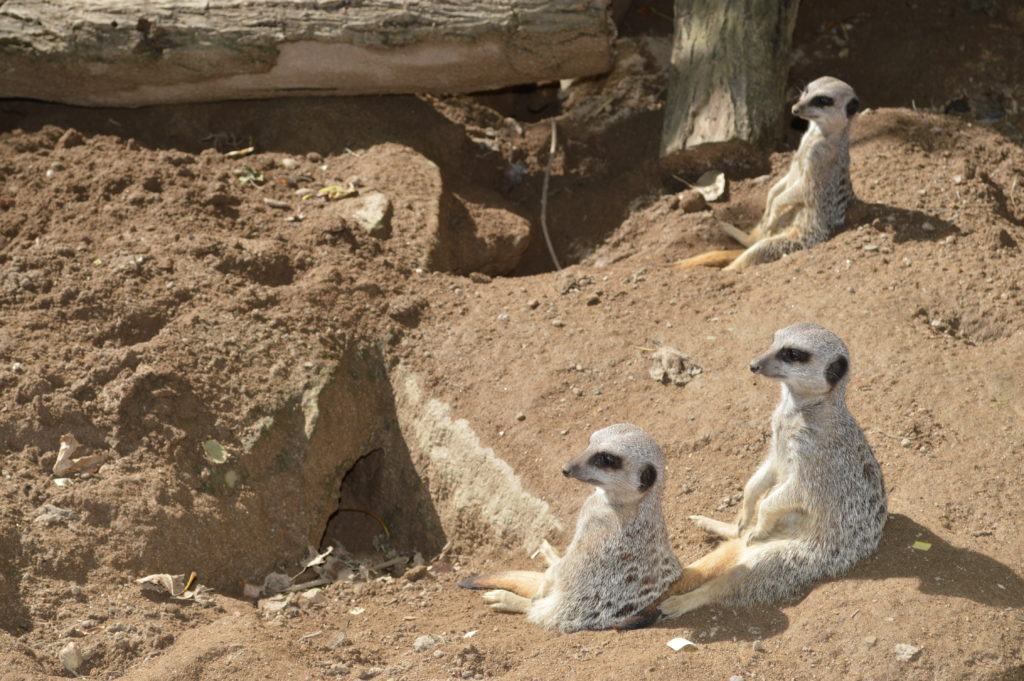 Next we sought out the lion enclosure to see the majestic king of the jungle. They didn’t seem as impressed with us as we were with them! Next door to the lions you can find the Carpathian Lynx. This was definitely a highlight of our visit. We struggled to see these forest cats on our first trip round the zoo, but if you do make time to do a second round to catch any animals you’ve missed it’s worth it. When we revisited the enclosure we had an amazing view of a mother Lynx and her playful cub relaxing in the sunshine.

The Village Farm was good fun – home to pigs, goats, squirrels and large bunny rabbits this was one part of the zoo where you could get right up close and pet the animals. The pigs in particular were very friendly and loved the attention, jumping up and unsuccessfully trying to squeeze through their wooden pen. After seeing many of the animals from a distance children seemed to enjoy this hands-on experience. Face painting was also on offer nearby with people emerging as their favourite animals.

We spotted creatures great and small in the Tropical House from frogs and lizards to snakes and sloths. The Two-toed Hoffmann Sloth can be found in rainforests and deciduous forests and typically live off a diet of leaves, fruit and flowers. A sloth’s long curved claws enable them to hang upside down onto branches whilst also used as a means to protect themselves from predators. Although the bottom half of the enclosure was in glass, if you carried on up the stairs the top opened out onto a balcony where you could see the sloth lazing in his tree. 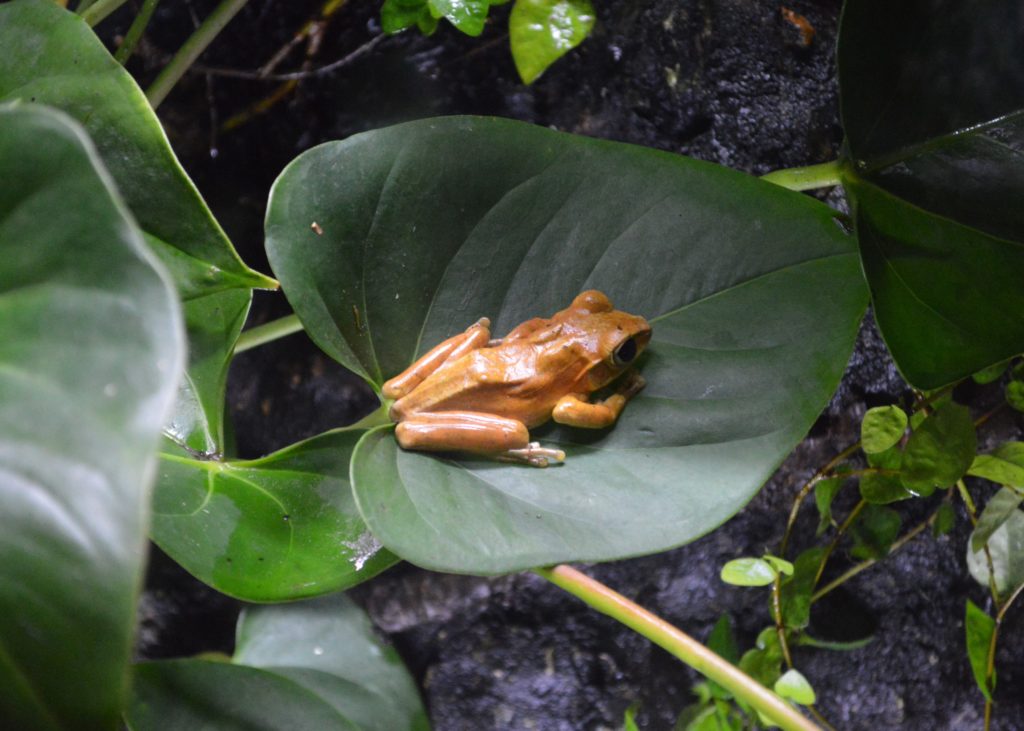 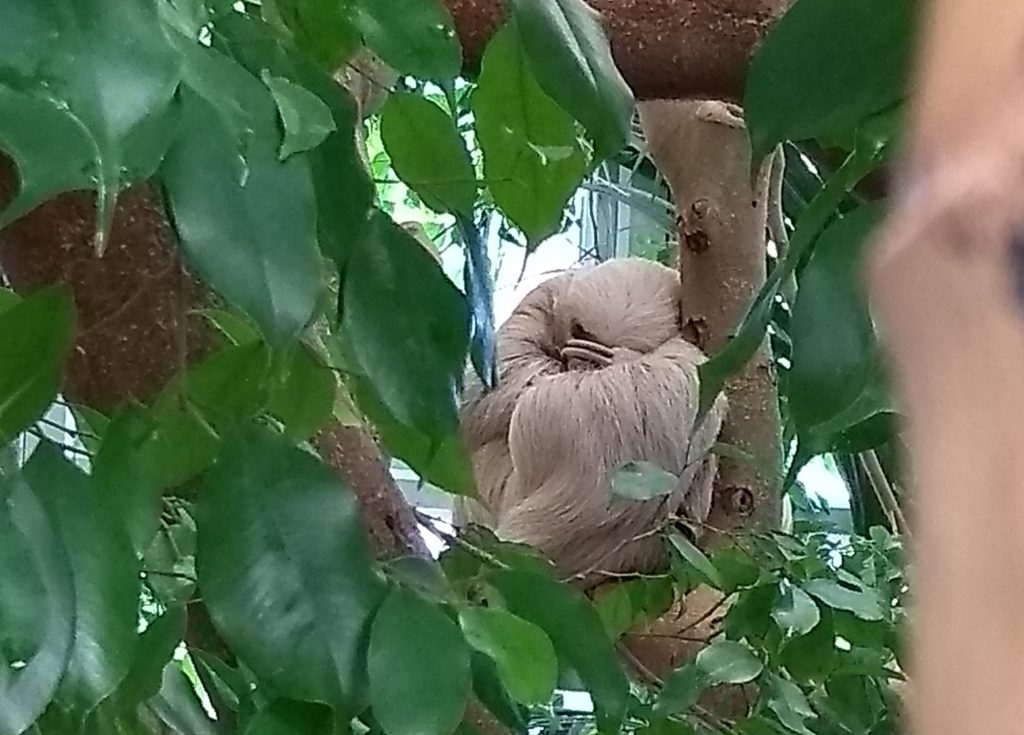 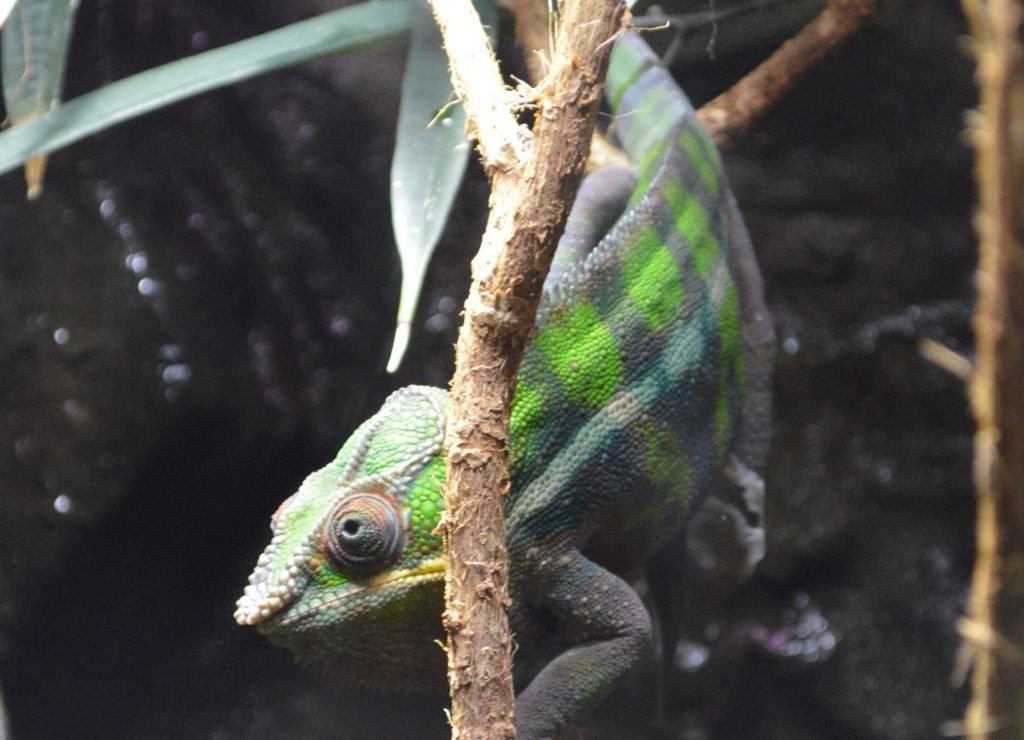 The final animal on our agenda was the infamous Red Panda. Native to the eastern Himalayas and south western China these animals feed mostly on bamboo, sometimes eating up to 200,000 bamboo leaves a day. As Red Pandas are more active at night, we only managed to catch a glimpse of one during the day – mostly hidden by its bushy tail!

Dotted around the zoo you will find information about extra special experiences that are available. One of these is the zoo’s Animal Adoption Scheme. From £35 you can choose one of ten animals available for adoption including the Red Panda and receive an adopter’s certificate, animal fact sheet, thank you letter and photograph of the animal and more. Your name will also be featured on its own plaque near the animal for 12 months. Other special experiences on offer include feeding some of the animals. Get up close and personal with lemurs, penguins, macaques, red pandas and even the lions! Or become a keeper for a day and experience life behind the scenes in the zoo.

These experiences and adoption packs are fantastic gift ideas for animal lovers and also help to support the vital conservation work that Newquay Zoo does on site and around the world. To find out more visit the zoo website. 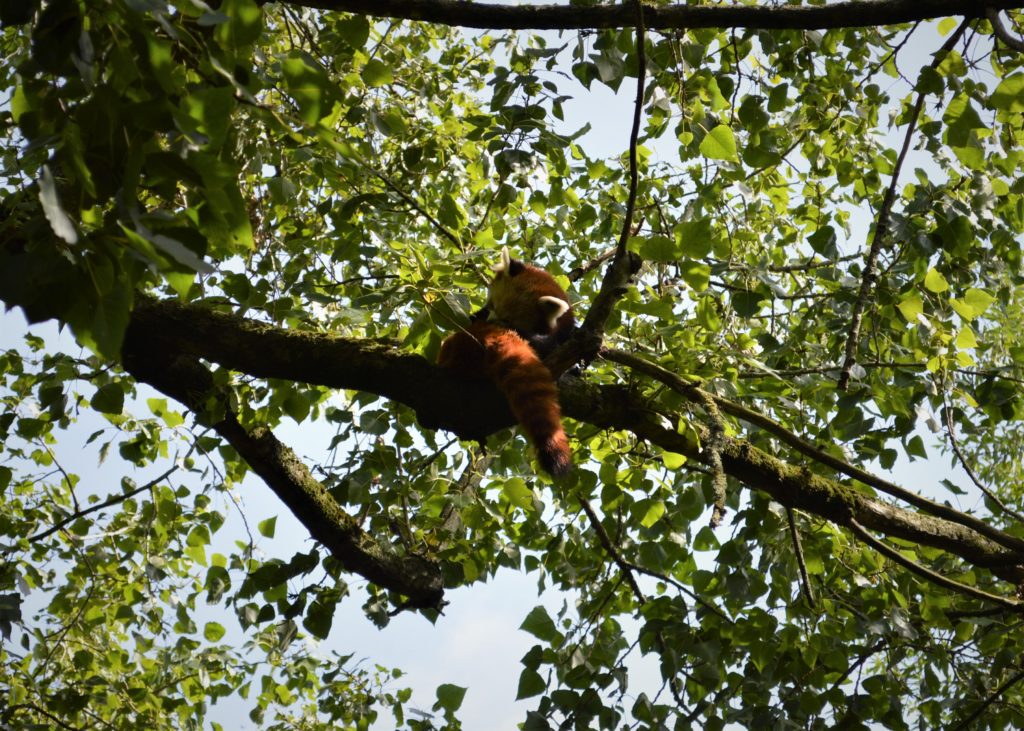 Of course a trip to the zoo is never complete without going to the gift shop! Newquay Zoo have lots of lovely memorabilia from cuddly toys and books to re-usable mugs and local delicacies. It’s a great place for presents and all profits made go towards supporting their conservation work.

Newquay Zoo is part of Wild Planet Trust, a registered scientific, education and conservation charity based in South West England. It is one of 3 zoos owned by the charity, along with 2 local nature reserves and 1 National Nature Reserve. Newquay Zoo is open all year round and after our trip we would definitely recommend a visit! Annual passes are available from £34.50 or you can purchase a combined annual pass from £43.50 for unlimited entry into all 3 Wild Planet Trust zoos – Newquay Zoo, Paignton Zoo and Living Coasts.

Thank you to Newquay Zoo for providing the fascinating animal facts and figures used in this post.

Find out more about Newquay Zoo