A Labour of Love

The Cornish Community Pay Tribute to the Fallen Cornishmen of WW1

Last year, Cornwall’s Regimental Museum embarked on an ambitious project to collect 9,687 handmade poppies – one for each DCLI serviceman and all other Cornishmen killed during active service in the First World War.

The handmade poppies collected through the museum’s community project are to be used to create a special exhibition at Bodmin Keep, the home of the county’s regiment. The Poppies will be used in a very special exhibit to mark the centenary of the end of the First World War this November. 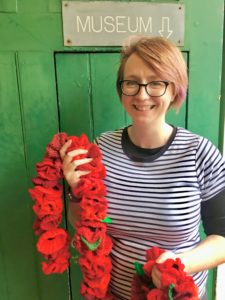 “We are attempting to commemorate every Cornishman who lost his life in active service during the 14-18 war, across each of the armed forces. It’s extremely touching that so many members of the community have put so much into this project, it’s been a real labour of Love”
-Mary Godwin, Director. Cornwall’s Regimental Museum.

Camelford local Lesley-Anne Harris, a graphic designer who volunteers at the museum has whole heartedly taken on the ambitious task of designing the poppy tribute. “It’s an enormous task to exhibit almost 10,000 poppies in a way which will have impact, poignancy and is a fitting tribute to the sacrifices made, but we just know Lesley who has a passion and flare for design will do it justice.”

“The overall look of the exhibit is inspired by the trenches and the battlefields of the First World War. I’ve used the museum archives to include images of the very soldiers that we are commemorating. The fact, the museum itself saw the young men passing through on their way to the front line really creates a special connection between the museum and the tribute.”
–Lesley-Anne Harris, Design Volunteer. Cornwall’s Regimental Museum.

The Exhibit has been a real community effort, with people and local businesses donating their time and materials to this unique project, and it promises to be a poignant display to remind us all, of the sacrifice made by the county’s soldiers in the First World War, this centenary year.

It will be unveiled to the public on November 7th to commemorate the Armistice Centenary and will be open for viewing until the end of December. 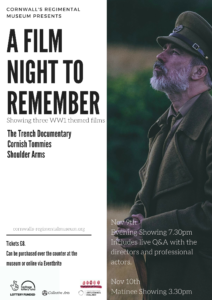 Cornwall’s Regimental Museum will also be hosting a special film night to commemorate the Armistice Centenary of the Great War with a set of special WW1 films.

You will have the opportunity to see the documentary made about The Trench; the sell-out immersive theatre production Bodmin hosted in June. Alongside two other films about The First World war; Cornish Tommies and Shoulder Arms.

Tickets are £8 you can book online via Eventbrite here.

NB: A limited number will be available to purchase over the counter at the Museum in advance.

There will be a special Q&A with some of the professional actors and director Jason Squibb on the evening performance, which will be the official public premier of The Trench Documentary.

The Q&A gives the audience a chance to ask questions about what it was like to take on the real-life characters of these brave men.

For more information about the exhibition and film night visit www.cornwalls-regimentalmuseum.org