aKa Dance Theatre: A Real Fiction – A Hyperactive Mix of Dance, Theatre, Meme and Pop Culture

Sam Nancarrow, one of our community reporters, headed to Perranporth Memorial Hall to watch A Real Fiction; which is loaded with current affairs, childhood nostalgias and one-hit wonders. This work has been co-created with the community, for the community. Read on to see what Sam thought!

This is a difficult review to write. aKa Dance Theatre has produced a superbly entertaining and compelling piece of work, full to the brim with content, humour, and energy. It will be difficult to choose what to rave about.

Jen Grant has directed a show with fantastic flow and pace. The whole show feels like a series of beautiful transitions from one section of content to the next. The pace slows when the audience could be in danger of getting worn out and picks up again before anyone has a chance to drop out of the action. This energy is delivered expertly by Joe Garbett, the solo performer of the show. Garbett offers a charming and enthused performance which instantly allows the audience to feel welcomed into the space and at ease with the performer. This charm doesn’t wane, it grows. After seeing Garbett re-enact Jaws for the third time behind the same audience members’ heads, who peer behind themselves slightly nervously, the joy to perform this show becomes very apparent. When Garbett isn’t channelling his inner pop culture shark, he could be upside down with his head in a yellow Minion bucket as his legs twist and grow like a tree, or he could be mouthing the words to Justin Bieber’s ‘Baby’ before telling the audience to stick around and wait for the bloopers. Yes, there are actual bloopers at the end of the show. Once the audience had applauded, Garbett went on to reperform a number of moments from the show. This time showing all the times they went wrong in rehearsals. This includes multiple failed attempts to jump onto a block of highly stacked chairs and a series of failed attempts at zipping up a coat. 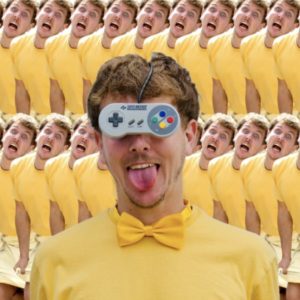 A Real Fiction covers an incredible mass of content in a short period of time. From cultural references which invoke feelings of nostalgia; to popular meme’s being turned into live performances and current affairs keeping everything feeling relevant. You could present this show to someone who has been living on the moon for the last decade and it would provide a riveting recap of everything they have missed. If this was someone’s first time back on Earth in ten years, then they would surely not regret spending at Perranporth Memorial Hall. A lovely intimate space that allowed the audience to feel at one with the performance. The teams working there were very welcoming and friendly, a credit to the venue. Credit must also go to Carn to Cove for facilitating this performance’s arrival in Perranporth, without their work a joyful and uplifting evening would have been lost. Rural touring theatre has a certain magic that can’t be captured in larger venues and is vital to producing culturally rich activity to the dispersed settlements of Cornwall. In a testament to how at ease many seemed to feel in this lovely hall, at the end of the performance a number of audience members got up to dance in the centre of the space to Saturday Night by Whigfield (previously performed during the show). This was a wonderful way to send everyone home with a smile on their face.

If I could put this show into a box and carry it around with me wherever I go, I would. A welcome medicine for the troubled times we are living in. A marvellous joy.

ABOUT CARN TO COVE

Carn to Cove is Cornwall’s performing arts scheme for rural communities. They are a pioneering charity that fills local sports halls, chapels and our wonderfully varied village halls with poetry, laughter, music, drama, stories and dancing.

Sam is a freelance theatre-maker and performer from Cornwall. He is currently based in Penryn. When Sam is not creating performance work, you’ll likely find him treading the footpaths of one of Cornwall’s coastal walks or trailing through the shops and bars of Falmouth’s high street.