Catching up with Anna Mansell

As part of our Feel Good February series we spoke to writer Anna Mansell about her podcast, cold water swimming, and her journey to achieve body neutrality.

Why did you decide to start the podcast and where did the name come from?
The podcast is called How To Breathe So You Don’t Look Fat and it was titled after a lesson I was told at 8 years old. There are two answers to how I started it. One is that I really wanted to start a podcast and talk about this kind of subject, and the idea terrified me so I thought that was probably a good reason to do it! And the second reason was in the last 6-12 months I’ve got really exhausted by the constant noise in my head about body and food. It’s been so destructive throughout my life; it’s influenced everything I have ever done. I am 43 and I am tired of feeling less than because I am more than. So I wanted to have conversations with other people as I knew that I couldn’t be alone in thinking like this.

Creatively I have been on a bit of a journey in terms of finding my voice, I’m a writer, and I’ve been writing very commercial women’s fiction for a few years. Whilst I have enjoyed that I have been feeling that I wasn’t quite in the right lane for where I wanted to be.

So I suppose the podcast was a culmination of growing tired of how I was feeling and trying to find ways of channeling my creativity into ways that felt authentically me.

This really comes through in the podcast as it feels as much of your own personal journey as well as a general podcast about body positivity.
It’s a bit of a response to body positivity movement on two levels. The intention of the body positivity movement as we understand it now is that we should all feel great in our bodies. But that’s not the origins of it, it was instigated for black women by black women to try and find equality for black bodies. In the last 18 months it has been adopted and swamped by lots of slim white women, not always but mostly, who go “look I’ve still got rolls, I’ve still got cellulite” which is an important message they are giving, so no shade on that, but the original intention has been lost in that process.

The other thing for me was that the “love and appreciate yourself for who you are” just felt like too big a reach for me. The idea of body neutrality i.e. not being horrible to yourself that felt much more achievable.

So the conversations that I have are about this is how I feel and this is where it’s come from, and knowing that I am not alone in that. Lots of the messages I get from listeners say that the conversations are relatable, and are things they have said or thought themselves. 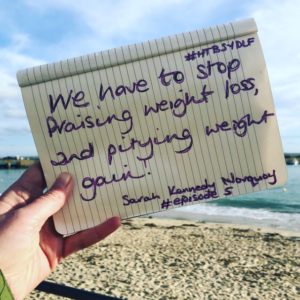 How do you choose the guests on your podcast?
Well in the first season, for full honesty and transparency, it was which of my friends or close acquaintances can I ask who might say yes! I have never done a podcast before so I needed people who would come along with me, be truthful, and who listeners would connect with. Now that I am planning season 2 it feels like there is a different process I need to go through. I want the podcast to be a space that feels all encompassing, that is diverse as it can, I want to understand different people’s experiences that are living in different bodies. So season 2 will be more curatorial than the first season.

Many of the conversations you have with your guests start out talking about bodies but they always go to other places like mental health, childhood experiences, fertility. Were any conversations surprising to you?
One of the conversations I had was with Sharmila Bousa. I have always looked at her being this capable, incredible strong woman, completely comfortable with herself and her body. But she also struggles, and she shared things that even her husband didn’t know until he listened to the podcast. So that was surprising, someone who I thought had it all sorted did not. But mostly these conversations reinforced what I think about myself. How those things we are told when we are small shape who we become and how we fall out of love with ourselves.

Do you think being at home during lockdown has changed your relationship with yourself? I know you have started cold water swimming during the pandemic, has this had an effect on you?
The sea swimming has been quite profound in terms of its impact on me, both physically and mentally. I have lived down here 11 years and in that time, apart from a very brief flirtation with paddle boarding, I haven’t been in the sea.

But I wanted to write about it and I knew I couldn’t write about it until I had done it. I had also reached a creative low and I needed to pause. So I decided I would go into the sea and write about it when I came back out again, and that gave me some breathing space to think about the writing and the swimming.

What happened was I went in once and then I wanted to go in again, and then I wanted to go in again. I first went swimming in July last year, and bar twice when it wasn’t safe to go in, I have swum every day. It has revolutionised my life and I am very aware of how lucky I am to be able to do this. Lockdown has given me the gift of time and space to think and really look at what’s important to me as a writer, but also as a human being and a woman and a mother and all of those sorts of things. 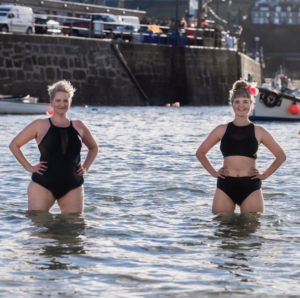 Do you swim solo or are you in one the new Bluetits groups that are springing up?
Well I am not part of a group as I am deeply antisocial! I am very happy to swim on my own, but as it’s Winter I think it’s safer to go in with someone (when restrictions allow). But if the water is safe and the weather is good I am happy to go in on my own. There is something for me about being suspended in the water, I feel weightless. Having felt so heavy for my adult life that feeling of weightlessness is a real gift and it’s something that I treasure and, this sounds very woo woo, it has been very healing for me.

Has the sea swimming had an effect on your writing?
It has been very freeing. If your internal narrative is constant and noisy and not very nice to you, when you vocalise it, it dissolves the power from the words, making space for other things to come in. So creatively both sea swimming and the podcast have been helpful to make away for courage to write what I really wanted to write. I hope it is authentically me and will resonate with other people. I hope I am being bolder and braver than I have been before.

You are one of the BBC Cornish Voices, has that been part of this emboldening process?
Yeah! I was quite staggered as BBC Writersrooms are incredible, and the list of people I am alongside are people I have respected for a long time. So to be considered part of that was a real boost to my confidence and something that I think I needed. I am learning as much as possible through it, and channeling that courage to be brave! It’s a brilliant opportunity. 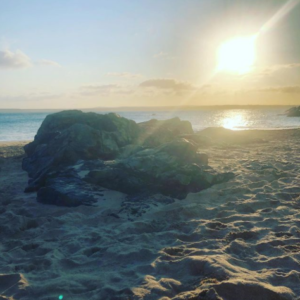 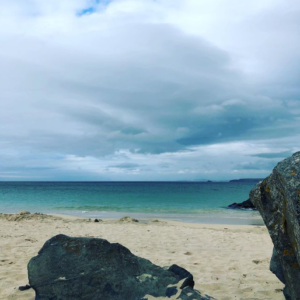 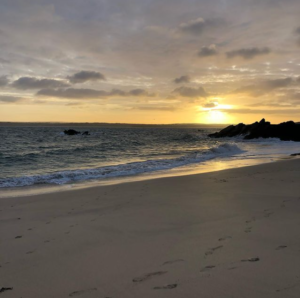 So when you are not writing, where is your favourite place to be in Cornwall?
Is probably Porthgwidden Beach. I have very happy memories of being there with the kids when they were growing up. Its where I prefer to swim when I can. There is something lovely about it even though it gets very busy in the summer and its kind of ‘commercial Cornwall’. That’s definitely the first one that springs to mind.

Lockdown aside, what would be your ideal day in Cornwall?
My ideal day would be a gathering the kids, my husband, and some friends together and going down to Grebe Beach near Falmouth and having a really nice swim. Then going and finding a pub on the river somewhere and eating all of the food with all of the friends. Having drinks and watching the sun go down. One day we’ll be able to do it again!

One final question, what do you love most about living and working in Cornwall?
What I love most is the freedom to be me. I think it took me a long time to work out what that looked like but I don’t think I could have done it anywhere but here. 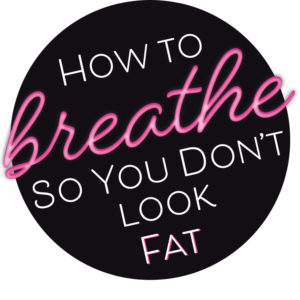 Listen to How To Breathe So You Don’t Look Fat 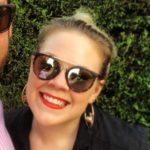