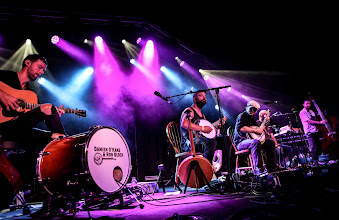 Get Ready For A Banjo Party!!

“I was utterly blown away by these guys. Exquisite musicianship. My gig of the year.”
Ralph McTell

When you look at their backgrounds, they’ve followed similar trajectories. Both began playing at a young age, immersed in their local scenes: Ron in Southern California and Damien in Coleraine, Northern Ireland.

Damien has been nominated twice at BBC Radio 2 Folk Awards and hailed by none other than Jo Whiley as a ‘sonic architect.’

Damien and Ron started working on their new record Banjophonics in April 2019. They release Banjophonics in 2022. A real treat for banjo lovers worldwide, they will tour the UK and Ireland in the summer and autumn, with a full band, to showcase another masterclass on tenor and bluegrass banjos and how their respective traditions meet and unite in perfect and thrilling harmony.

‘I really like this project a lot. It’s incredibly well played and recorded, nice surprises with the guests!! Anyone that likes Irish and American roots music will love this record.’ – Ricky Skaggs

“I challenge banjo non-believers not to be moved by this transatlantic banjo union.” – Lynette Fay, BBC Radio Ulster

“Beautiful and wild, there are no boundaries here. Something I have never heard before.”
Jerry Douglas