Yo Ho Ho and a bottle of rum, it’s time to take to the high seas with Miracle Theatre’s production of Treasure Island.

Since 2016 Miracle Theatre have taken over the Princess Pavilion for Christmas, starting with Cinderella followed by Bah Humbug! A Christmas Carol, and Aladdin. Treasure Island is their latest Christmas Show to take to the stage. Adapted and Directed by Bill Scott, the show follows the plot of Stephenson’s original story, with a few updates (our hero is now a Cabin Girl rather than a Cabin Boy).

The show opens at the Old Benbow pub where we are introduced to Hawkins (who we follow on her briny adventure) and her mother, the proud Mrs H. All is well until Billy Bones arrives and dies on the premises leaving a treasure map that belonged to the infamous pirate Captain Flint. Soon a bandit gang who used to sail with Captain Flint arrive at the pub and turn it over in a bid to find the map. But Hawkins has cleverly hidden it and they leave empty handed. Once the Pirates have left, Hawkins shows the map to Squire Trelawney and Doctor Livesey and they hatch a plan to charter a ship to find the island and locate the treasure. But unbeknown to them their crew is made up of the same gang of pirates who plundered the pub to find the map. These salty seadogs, including the dastardly Long John Silver, board the ship and hijinks follow… 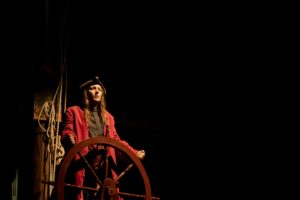 As usual with a Miracle show, the 15 characters are played by just 6 performers. The cast are having huge fun, with an array of accents and bright costume helping them transform from country squire to grizzled sailor. There is a brilliant range of buccaneers, we loved the Australian Betty Bloodblister (Keri Jessiman), feisty Israel Hands (Felix Guyer) , gnarled Billy Bones (Steve Jacobs), marooned Ben Gunn (Jason Squibb) and of course the double crossing Long John Silver (Benjamin Dyson). Leading us through the story is the plucky Hawkins (Hannah Stephens) who transforms from Cornish bar maid to feisty sea captain.

As you would expect from a story about pirates and buried treasure there are some tremendous sword fights full of fisticuffs, blood splattering and gun shots, designed imaginatively by fight director Felix Guyer. The audience even get to join in with one fight by throwing cannon balls at the stage. 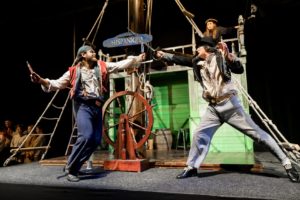 Alongside the swashbuckling action is the rousing choir, led by musical director Vicky Abbot. Most of the soundtrack is provided by these fantastic community singers, and all of the shanties have been written especially for the production. We particularly liked the rousing Pick a Fight.

The set (designed by Jude Munden) was ingenious. Painted in a sun faded green, the clever use of moving mast took us from the cosy pub, to the stern of a pirate’s ship, and outside the besieged stockade. The fireman’s pole to the right of the stage was used to great comic effect, and we cheered when Hawkins finally slid down it.

Treasure Island plays at Princess Pavilion until 5 January, book now for swaggering pirate fun for all the family. 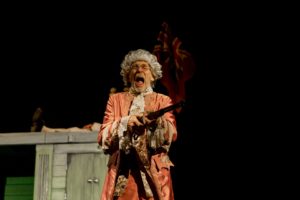 ABOUT MIRACLE THEATRE
Famous for touring a rich and diverse blend of original, inventive theatre since 1979, Miracle Theatre is one of Cornwall’s most renowned theatre companies, with a reputation for delivering a unique, lively and energetic performance style in venues across Cornwall and all over the UK. Performing in a range of indoor and open-air locations and working with promoters to bring ‘big’ shows to smaller venues, visitors can expect high-energy, creative comic style and visual appeal from any one of this much-loved theatre company’s shows.