This weekend Cornwall 365 What’s On took a trip to St Endellion for the North Cornwall Book Festival.

This was the seventh North Cornwall Book festival which is created by Endelienta, a venture that brings together St Endellion Parochial Church Council, the St Endellion Festivals Trust and the Diocese of Truro. It’s an intimate festival across with two main venues but attracts a high calibre of talent. This year writers included Imtiaz Dharker, Raynor Winn, Tessa Hadley and Phillip Reeve.

Our visit began on 10am on Saturday morning with the Cream of Cornish event. We made our way down to the Main Marquee, a big top with beautiful decoration inside. Despite it being a grey October day it was lovely and warm in the tent and we settled down to hear four Cornish authors, Sean Thomas, Mary J Oliver, Paul Fiddes, and Natasha Carthew, read passages from their newest publications. It was great to hear the variety of work, from a collection of poems to a thriller about voice assistants, like Alexa, going rogue! 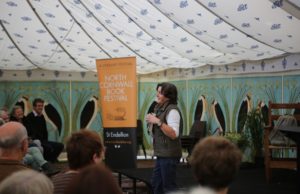 We then moved next door to St Endellion Church for the sold out Young Readers event with Michael Morpurgo, author of over 130 books for children. Michael held the audience, made up of lots of children and many enthusiastic adults, in rapt attention as he spoke about his connections with Cornwall and how his Uncle’s training at the St Eval RAF base became the inspiration for his novel In the Mouth of the Wolf. Morpurgo answered questions from the audience including his favourite book as a child (Treasure Island) and who his favourite writers are (Ted Hughes and Robert Louis Stevenson). He then spoke about the Refugee crisis, and how his visit to the Jungle and subsequent work with a group of young Afgan boys (and their love of cricket!) is woven into a new version of Gulliver’s Travels. Morpurgo concluded his talk with a reading from this new work, Boy Giant, and invited us to join him as he sang a song from the upcoming film of his book Waiting for Anya. 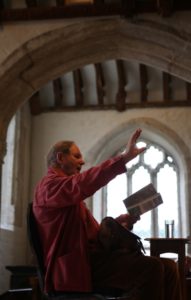 Between each talk there was a half an hour break to visit the café or pick up a coffee from the van parked in the courtyard. We ate a hearty fruitcake and delicious vegan buns before going back into the main Marquee. 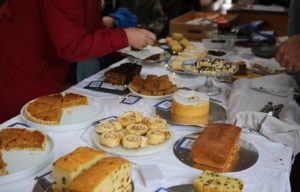 Our next session was David Nicholls in conversation with Patrick Gale. Patrick Gale is the Artistic Director for the North Cornwall Book Festival and many of the sessions are hosted by him. David Nicholls spoke about relationships in his works, and how in his new book, Sweet Sorrow, he wanted to move away from the difficult relationships in One Day and Us, and write about the overwhelming nature of first love. Nicholl’s is also a successful screen writer and his works/adaptations include Starter for Ten, Great Expectations and Tess of the D’Urbervilles, and he spoke about the differences in writing for screen, and how this process has influenced writing his novels. 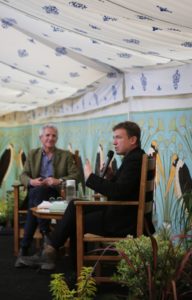 We enjoyed Nicholl’s readings from Sweet Sorrow so much that after the session we both purchased a copy from the Festival book shop. The shop (run by Padstow Bookseller) is stocked with books featured in the Festival, as well as other Cornish publications, and all of the authors were on hand after their sessions to sign any new purchases! 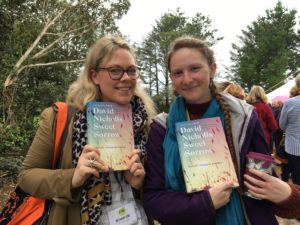 Our final session of the day was John Boyne in conversation with Petroc Trelawney. The talk began with Boyne talking about the controversy around his novel My Brother’s Name is Jessica and his impetuous to “write what you don’t know and find out”. Boyne talked about being an Irish writer and the tensions this brings, before moving on to speak about his book Ladder to the Sky, which he read from. It was great to hear Boyne speak about how he found adapting his own work difficult, having previously listened to David Nicholl’s completely different take on the subject.
The Festival carried on into the afternoon with further talks by Raynor Winn and Tracey Thorn, followed by music from the Blackheart Orchestra in the evening. Across the weekend there were workshops, performances by Bagas Degold & Annamaria Murphy, and Gabrielle Ducomble, as well as talks by a host of other leading writers. 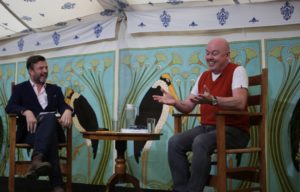 The Festival record the sessions, and you can listen to these Podcasts here

The North Cornwall Book Festival takes place every year, and we can’t wait to return in 2020. In the meantime Endelienta organise a host of concerts and events throughout the year. Upcoming events include Kevos, The People’s String Foundation, and The Portorius String Quartet. Read more here.

Endelienta wish to make St Endellion a community hub for the arts and spirituality – attracting people from North Cornwall and beyond. With a year-round programme of classical, folk and jazz concerts, workshops, visual art exhibitions, festivals and reflective days, they reach out to local audiences and those visiting from further away, including young and older people and to those affected by poverty, disability or social isolation.