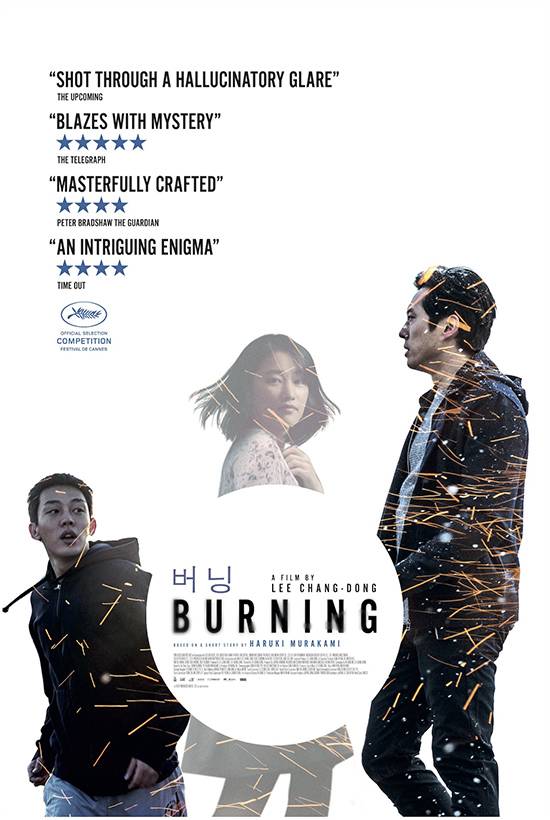 While working as a courier in Seoul, aspiring young writer Jongsu (Yoo Ah-in) encounters the lively Haemi (Jong-seo Jun), a childhood friend from his hometown. The two spend the day together, and when Haemi asks him to feed her cat while she’s away on a trip to Africa, Jongsu is convinced of a burgeoning romantic relationship. But on her return, when he arrives at the airport to collect her in his run-down truck, Jongsu is surprised and confused to find Haemi accompanied by the handsome, Gatsby-esque Ben (a superbly enigmatic Steven Yeun).
The three begin an awkward friendship, with Jongsu’s feelings for Haemi growing ever stronger, even if it’s apparent she has fallen under the spell of his rich and mysterious rival’s charms.
Suddenly, after Ben makes a strange confession, Jongsu is led to question his motivations and he sets off on an increasingly desperate search to uncover the truth, even if the line between reality and imagination begins to blur.

We will be watching in our virtual screening room, where we can view the film and chat online together. The screening room must be accessed using a web browser on a laptop or computer (it won’t work on tablets or phones). You only need to book one ticket per device, so if you are watching with family or housemates on the same screen, you don’t need to purchase multiple tickets.

This film is in Korean with English subtitles.

Tickets are offered on a sliding scale of £2 – £8 per household.

The Fisherman’s Friends (12A)

YourScreen: World cinema in your living room with C Fylm